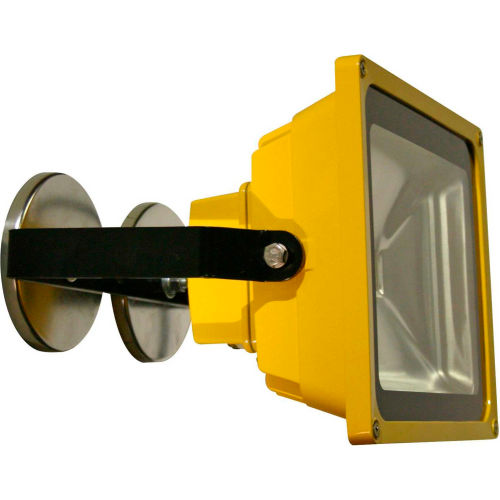 Ships in One Business Day
Add or Change Zip Code(s)
The battery powered Beacon Light LED portable flood light changes the game completely. Using the newest LED technology, the 30W battery powered Beacon Light puts out the same amount of usable light on your work site as a 300W quartz halogen flood light, without needing to be plugged in. You no longer have to try to work on a remote site using flashlights that don't provide enough light.Ideal for construction, maintenance, emergency services and first responders, the battery powered Beacon Light is a truly bright flood light that will illuminate an entire scene, unlike many other portable LED lights. It's easy to see how it would perform by looking at what a traditional halogen light can do for your scene lighting. The Beacon Light performs at the same level, but it doesn't require bulbs or a power cord, and it doesn't generate any dangerous heat. The battery powered Beacon Light LED flood light generates light via a 30W LED integrated chip, which is solid state construction and can therefore endure shocks, vibrations and rough handling without breaking the LEDs. Also, the Beacon Light is cool running and safe to touch even when left operating for hours and days on end. The LE965LEDC battery powered unit can be mounted in a variety of ways (see alternate SKUs). This SKU comes with 2 x 130lb pull-strength magnets for mounting on metallic surfaces. Work for up to four hours on a single charge. Truly a bright remote area light.